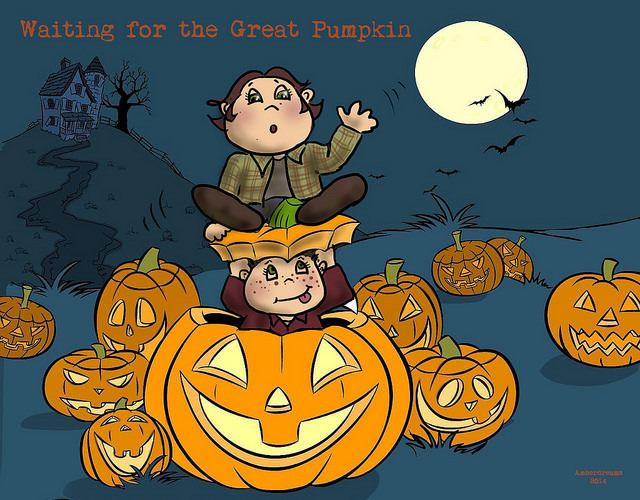 Title: The Great Pumpkin 2: Return of the Season of the Witch's Revenge

Disclaimer: I do not own Supernatural, and I'm not making any money off this fanwork.

A/N: Written for the SPN Big Pretzel Halloween Reverse Micro Bang and inspired by Amber1960's wonderful art, "Waiting on the Great Pumpkin". My brain went to a literal 'cracky' place when I saw her adorable piece, so forgive me for going into crazy territory, where Dean refuses to be so stinkin' cute. Happy Halloween!

Return of the Season of the Witch's Revenge*

*Not actually a sequel.

It was a dark and stormy night. Well, not actually. It was a rather pleasant evening, if a touch nippy, with a bright yellow moon lighting the rolling hills in front of the haunted house. Dean swore under his breath when his internal editor corrected his observation. If, upon retelling this tale, he chose to say it was an awful night, then nothing would stop him. Facts be damned. Because he sure as hell wasn't going to re-tell the part where he and his brother were stinkin' adorable.

He made another hopping leap against the driver's side door of the Impala and almost latched onto the handle before his pudgy fingers lost their grip and he slid down the slick metal.

"Dean, language," Sam chastised, then stopped himself, a horrified look on his overly round face. He stared at his brother, eyes especially wide now that they were thrice their normal size. "I can't believe I just said that...I think the transformation is getting stronger."

"Great. That's just great. Soon we'll be talkin' like muppets." Dean glared at his reflection on the car. It was distorted in the moonlight, but still clear enough to leave him sneering at his tiny stature, his pudgy features, his are-you-kidding-me button nose. So. God. Damned. Cute.

And far too small to reach the gas pedals if he actually managed to crawl into the car.

Dean growled in frustration and stomped off, away from the dilapidated house and its driveway and his baby. He had to bite down a dramatic sob, which pissed him off to no end. Sam was right; the curse was getting stronger.

"Dean, where are you going?"

Dean could hear Sam's pitter-patter against the grass. His brother was at his side a moment later. "The hunt is back that way," Sam reminded.

Dean pulled out his handgun, which had shrunken down along with his clothes. He fired at the ground, and Sam flinched at the loud pop. A tendril of smoke rose from the barrel, but no bullet had exited. He popped open the chamber to show a plastic red ribbon on the inside.

"Our weapons have been turned into 'cap-guns', Sammy. My knife is now rubber. They're toys. We're toys. What the hell happened back there?"

Sam shook his head. "Remember those markings we found when we entered the house? I told you they were a warning to any who ventured inside. Our research already told us a witch used to live in the house, and we already knew she was probably the ghost we were hunting..."

"But since when can ghosts still perform magic? And if she was a witch, shouldn't she be knocking on Crowley's door?"

Sam shrugged. "Maybe she wasn't that kind of witch. Not all of them use demon powers, Dean. You know that."

"Don't talk to me like...like I'm a tiny little doll man, damn it!" Dean picked up speed. Which didn't mean much, considering the length of his legs. He realized he was only about a hundred yards from the house. "So, if she was Glenda the Good Wiccan, why the hell did she drive those poor kids into a mental institution?"

Sam shrugged. "We know the house has been reportedly haunted for nearly twenty years, when the witch, Dolores, died. We know the kids she drove crazy broke into the house for a Halloween prank and came home screaming about ghosts and not much else...But since we didn't do the victim interviews first, like I suggested－"

"－we don't know exactly what happened to them. For all we know they could have been turned into...this too. I mean, we're used to weird situations, but a normal person might go a bit nuts if they spent a night as a doll-person-thing."

"If this happened to them, too, then how'd they turn back into people?"

"We'd know if we'd interviewed the victims before staking-out the house, wouldn't we?"

"Come on, Sammy! We knew who the ghost was. We knew she was buried somewhere on the property. Fast-forward to the salt n' burn, and we should have been on our next case by morning."

"And that's why this hunt has progressed so smoothly?"

Dean topped the next hill, huffing, and came to a stop. "Tell me this, smart guy. Why would the bitch do this to us? Why the hell do we look like friggin' cabbage patch kids, Sammy? I mean, come on, she could have had the decency to turn us into toy soldiers or action figures. Or, you know, kill us outright."

Dean startled, almost losing his footing. He hadn't registered his new surroundings until Sam had pointed them out. Down the slope of the hill was an army of Jack O' Lanterns. Dozens of carved pumpkins of all shapes and sizes were staring up at the shrunken hunters.

"This isn't creepy at all..." Dean muttered. "Tell me there's a sane reason why there are so many pumpkins in the middle of nowhere."

"They're all freshly carved," Sam replied, not helping matters. "Why would the witch-ghost carve pumpkins? We know she died on Halloween, but still...Dean, what's that sticking out of the small one?"

Dean moved forward cautiously, pulling his rubber knife out on instinct. He slowly pulled a slip out paper out of the pumpkin's mouth and lifted it up to read by the moonlight. It was a child's writing, sloppy and crooked, but easy enough to make out: "Dear Witch Lady,

Please don't sent the Great Punkin after me and my sister when we go trick or treat. We'll be good and stay away.

"Dean, there's more of them." Sam reached into a squat pumpkin, freeing another note. "This one is from Britney, promising to stay off the witch's land...Here's another from 'Andrew' asking the witch to, heh, send her pumpkin after his big brother. Oh, this kid mentions his mom, 'Dear witch...My mommy said to leave you this to keep your pumpkin monster away. I hope you like it. Happy Halloween.' Dean, I think these pumpkins were carved by kids, not the ghost."

Dean blinked. "Wait...so, we're thinking these are, what? Tributes to the local witch-ghost? What the hell is the Great Pumpkin?"

"It's probably local lore. Whatever the pumpkin is, it's probably not dangerous...I mean, I didn't find any links to deaths connected to the property or, well, pumpkins. Maybe, when Dolores died, someone made up a story to keep the kids away."

"A lame story." Dean snorted, amused. Less so when he saw Sam's eyes had widened into saucers.

"Uh...maybe not made-up," Sam suggested, at a whisper.

Dean glanced over his shoulder and saw movement around the hill. It was large, round, and...orange. "You've got to be kidding me."

Sam didn't need to be told to run. The two of them took off before the thing could get any closer. They weaved through the field of Jack O' Lanterns as fast as their short legs could take them. Dean tripped over his feet, but didn't call out, seeing his brother disappear between a few larger pumpkins. He narrowed his eyes at one that was particularly big, almost as tall as he currently was, and squeezed through its wide mouth.

Dean held his breath, listening. He couldn't hear Sam, but he could hear the slick sound of something rolling over the grass. Through the pumpkin's eyehole, he watched it pass. It was massive, and whatever face had been carved into its orange flesh had long since shriveled, caving in on itself. It's long stem trailed down behind it, curling as it pushed its massive weight along, leaving a trail of yellow and brown guts and seeds behind.

The Great Pumpkin came to a stop in front of Dean's hiding spot, and he could almost feel someone watching him. His grip tightened on his rubber knife. Then, just as quickly as it had appeared, the pumpkin creature pushed itself past the other Jack O' Lanterns.

A long minute passed, and Dean heard a new sound, someone hissing his name. He pushed his pumpkin sideways, kicking the cap off and rolling out. Sam spotted him, a goofy smile on his face. "You hid in a pumpkin? That's so...cute."

"Shut up. Dude." Dean frowned. "Are you taller? And your eyes are starting to look normal again."

Sam nodded. "Yeah, I think I figured out how to fix this. Come on."

Dean followed him and realized they were headed toward a short wooden fence. It looked as if it matched the one flanking the driveway. "Property line?"

Sam smiled, still looking too freakishly dollish for Dean to take seriously. "As soon as I got close, I felt a change. I think, once we cross over, we'll be back to normal. I don't think the witch's curse was meant to be permanent. Actually, I don't think she meant any real harm."

"Seriously? This is her version of 'get off my lawn, you kids'?"

"Still should gank her on principle."

"And you're afraid that if she's gone, she can't lift the curse, and we'll be stuck as tiny people forever?"

Dean shrugged in agreement. "Maybe we should toss this one to Garth."

Sam pushed through the fence boards, and Dean squeezed through after him. Dean groaned as soon as he was on the other side. He could already feel his body changing.

Sam sighed. "I just realized something...We left the Impala in the driveway."